All Collections
The Basics
Monte Carlo vs. Historical Simulation

Written by Georgios Bouzianis
Updated over a week ago

At Timeline, we believe that historical data over 118 years is the most objective way to illustrate asset class behaviour. However, we understand that some users may want to test the withdrawal strategies based on their return expectation.

Timeline enables users to test withdrawal strategies based on extensive historical data as well as Monte Carlo simulations. Extensive historical data takes financial planning out of a ‘theoretical’ realm into the ‘empirical’ world, because it’s based on observed behaviour of asset classes. This frees a financial planner from having to second guess how asset classes are going to perform in the future.

The main criticism of the historical model is that there aren’t enough scenarios in history to account for the wide range of possible outcomes. Some periods overlap and aren’t entirely independent of each other. Also, global markets are more complicated today than they’ve ever been, and returns could be worse in the future.

Monte Carlo attempts to overcome the limitations of historical data by generating a wider range of scenarios. It is not a fortune teller! It models the probabilities of the various possible trajectories for the value of a financial asset and applies meaningful metrics to the whole range of trajectories.

Monte Carlo method allows for “what-if” analysis. However, the method is as good as the assumptions for the underlying stochastic model that drives the price of an asset. 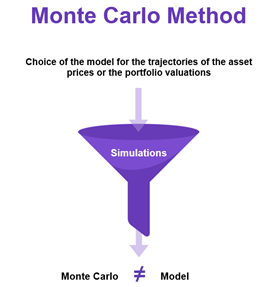 At Timeline, we use Geometric Brownian Motion. The GBM model was introduced by MIT economist Paul Samuelson in the 1950’s, and later became notable as an ingredient in the 1973 Black–Scholes option formula. The model assumes that asset prices are log-normally distributed and has two inputs: the expected rate of return and the volatility. This model is well known and easy it is easy to implement.

However, one of the main disadvantages of GBM is that it does not have the mean reversion property which is a key characteristic of most asset classes.

As Dr. Derek Tharp CFP notes: "Whether the prior year was flat, saw a slight increase, or a raging bull market, Monte Carlo analysis assumes that the odds of a bear market decline the following year are the same. And the odds of a subsequent decline in the following years also remains the same, regardless of whether it would be the first or eighth consecutive year of a decline! Yet, a look at real-world market data reveals that this isn’t really the case. Instead, market returns seem to exhibit at least two different trends. In the short-run, returns seem to exhibit “positive serial correlation” (i.e., momentum – whereby short-term positive returns are more likely to be followed by positive returns, and vice-versa), and, in the long-run, returns seem to exhibit “negative serial correlation” (i.e., mean reversion – whereby longer-term periods of low performance are followed by periods of higher performance, and vice-versa)."

For a detailed discussion of the strengths and weaknesses of historical and Monte Carlo models, please see:

Did this answer your question?